Home » eXPerience and rc diary » MY RC Hobby. How I came back with a bang – Part 1

In the nineties when the RC hobby started

My brother started with the RC Hobby. He got a Tamiya Thunder Dragon for his birthday. That buggy was amazing. it had 4wd, was fast and had a futuristic look. When it came out brushless still was remote future. So the car had a brushed motor. The first thing he did was changing to motor to a better one. Man, I was so jealous about his buggy that I got a buggy for Christmas some month later in 1991. It was a Tamiya Grasshopper II – a little bit smaller, a little bit slower but awesome.

It was a kit and it was epic to build this buggy by my own. This was the beginning of my beloved RC Hobby. We drove the buggys nearly every day, everywhere at any time. We drove on in the grass on the streets, chased passing cars. We loved our RC hobby. But the days passed by and the buggys fell into oblivion. I cannot remember why but he just didn’t play with the buggies anymore. Maybe because my brother did his moped driving licence and had no more desire, maybe because I came into a residential school, later maybe puberty ;).

It was the summer of 2012. A friend and colleague at work asked me if I’m interested in coming to his hometown because he and his friends race nitro rc buggys. Oh rc buggys? Oh nitro? This sounded so epic that I instantly remembered my Tamiya Grasshopper II and my very first bashings. I accepted the inviation and some days later I stood on a tractor trailer and watched the guys racing their noisy, smelly, dirty and fast rc nitro buggys on their own private track. I was astonished, I flabbergasted! I needed a buggy! I needed one, I needed it NOW! I was able to drive a rc buggy. I was a little bit exited, unpractised and I didn’t know how to controll it on jumps. The other funny thing was that when I started the rc hobby in the nineties rc pistol radios didn’t exist. 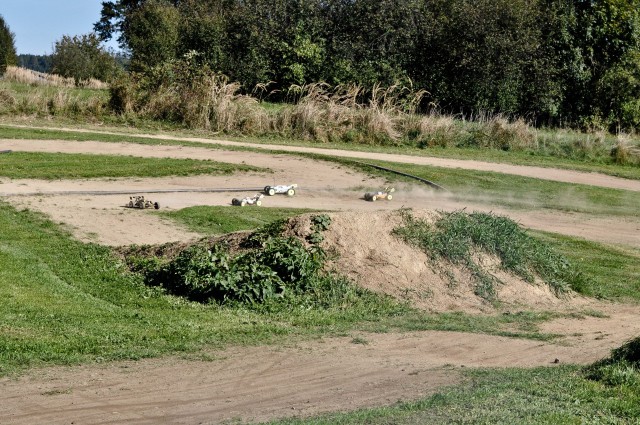 The following buggies/truggies were raced:

Which one should I buy? Everybody told me to buy the car they race because it’s the best you can buy and they have a lot of spare parts to share if needed, except the Rc8.2 driver. He was new to the hobby. I loved how his buggy looked like, it was just gracile. Fast and nice to look at. This would be the buggy to “restart” my rc hobby again. But what would this cost? I had no more rc hobby stuff.